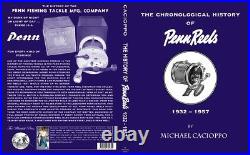 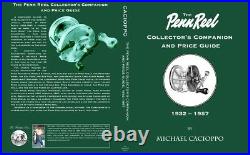 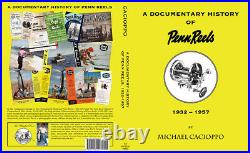 8.5" x 11" Softcover - 286 Total Pages - Full Color Throughout - 100s of Photos. One of the greatest success stories in the history of fishing tackle is the Penn Fishing Tackle Manufacturing Co. Founded by Otto Henze in the teeth of the great depression, Henze revolutionized the field of saltwater angling, making the sport affordable for the working man by creating brilliantly simple and rugged fishing reels that would stand up to generations of use. Here, for the first time ever, Penn reel historian and collector Michael Cacioppo takes you through the history of Penn year by year, from its founding in 1932 through its 25th anniversary year of 1957. In between youll watch a fledgling company, founded on determination and hard work, enter the cut-throat business of fishing reel manufacturing and come to dominate the saltwater field in less than a decade.

From the original Models F and K to the Sea Ford to the legendary Penn Senator, this book covers the origins and development of all Penn model reels built during the companys first quarter century of existence. Includes a Foreword by David Martin, formerly Penn's CEO and CFO! A must have for anyone who has ever loved a Penn reel!

ABOUT PENN FISHING TACKLE MANUFACTURING COMPANY. The Penn Fishing Tackle Manufacturing Company was founded in Philadelphia, Penn. In 1932 by Otto Henze, a German immigrant who came to America in 1922. He became a machinist at the Ocean City Manufacturing Co. Where he learned the art of reel making.

In retrospect, you could not have picked a worse time to start a company in American history. The Great Depression was in full swing; the Gross National Product fell 13.4% that year alone, the biggest drop in American history, and unemployment soared to over 25%. Henze was not dissuaded by the bread lines. In 1932 he worked out the details of his prototype reels, which he designed with a philosophy that guided Penn down to the present: make it simple, make it work. Working out of a third floor loft in the shop of William Schmitz & Co. He built the first Penn Models F and K. The Model F was a classic bakelite surf casting reel; the Model K had reinforced side plates and a free spool mechanism (some also had a star drag). By 1933, he was ready to sell to the public. In 1936, just four years later, his gross sales had increased tenfold. As the title of an article in The Sporting Goods Dealer that year declared, it was Henze who made a Millionaire's Sport Become the Sport of Millions. The most important voice in the sporting goods world credited Henze with pioneering big game fishing reels at budget prices.

By 1939, Penn had grown so large that they were the dominant force in the saltwater fishing world; World War II intervened and Penn played a role in this world conflict. After the war, Penn saw incredible growth, entering a golden age in the company's history. From the Model 85 to the Squidder to the Senator, Penn said the standard for the field. For the first time, author Michael Cacioppo outlines a chronological history of Penn reels.

From the very earliest prototype to the 25th anniversary, Cacioppo has left no stone unturned. This exhaustively researched book, the product of over fifteen years of research, is the most definitive history of Penn written. Perfect for collectors, historians, and anyone who ever loved a Penn reel, it has hundreds of color photos and reproduces numerous early company ephemera and advertisements. 8.5" x 11" Softcover 222 Total Pages 100s of Black & White Images. The essays include detailed information on the Penn Prototype Models F and K, the earliest days of Penn reels, the Penn Sea Hawk, the Sea Ford, the Bay Side, the Long Beach, Quick Take-Apart Penns, the indomitable Squidder, the legendary Senators, Penn trade reels, left-handed Penns, color variations of Penn reels, South African exports, light tackle Penn casting reels in the pre-war era, Penn Anniversary reels, the Penn formula, and hot rod Penns of alantani. The Price Guide includes individual listing of every model Penn offered year-by-year from 1932 through 1957, with prices included for every known reel. Designed as a companion to The Chronological History , the Companion is a superb volume that gives the Penn collector more of what they love! When you put together a book especially one that seeks to be definitive it is always difficult deciding what goes in and what gets left out of a book. The book, which came in at nearly 300 pages, had by necessity to leave out details about a lot of the most important Penn fishing reels. The problem is that the material that was left out is important and worth preserving.

It collects eighteen essays that more fully explore areas of Penn reels that, due to space limitations, could not be published in The Chronological History. From left-handed reels to colored Penn plates, to the intricate details of Penns competition in the early days to Penn trade reels, to in-depth analysis of reels like the Senators, Sea Ford, Long Beach, and many, many others. The data is invaluable; once the proper age of a Penn reel is determined, the reader can simply look up the proper model in the table and discover the current value range for the reel. This will be an invaluable tool for collectors, dealers, resellers, and anyone interested in early Penn reels. Combined with The Chronological History, it gives a definitive look at the first 25 years of Penn reel history!

It is divided into three sections: Section One, which covers original documents and letters to and from Penn and photos from Penns first ledger book; Section Two, which contains a complete set of Penn catalogs from this period; and Section Three, a photographic essay of Penn during this era. A must for any Penn collector! Here, for the first time ever, is a complete set of Penn Fishing Tackle Manufacturing Co. Catalogs and other documents and photos pertaining to its first 25 years of history. It also includes everything from correspondence between Otto Henze and other tackle makers, to images of the first sales ledgers, to photos of the factory floor. This work will serve as a standard reference for many years, as well as a great companion to the previous two Penn histories in this series. A must for any Penn reel collector, dealer, or historian! This is the final volume in our series on the first 25 years of Penn History. The item "3 VOL SET Penn Fishing Reel History 1932-1957 ALL MODELS ALL CATALOG 800+ PAGES" is in sale since Tuesday, November 24, 2020. This item is in the category "Sporting Goods\Fishing\Vintage\Reels\Other Vintage Fishing Reels". The seller is "booksinbulk" and is located in Cincinnati, Ohio. This item can be shipped worldwide.